Come to Herceg Novi for the Mimosa holiday 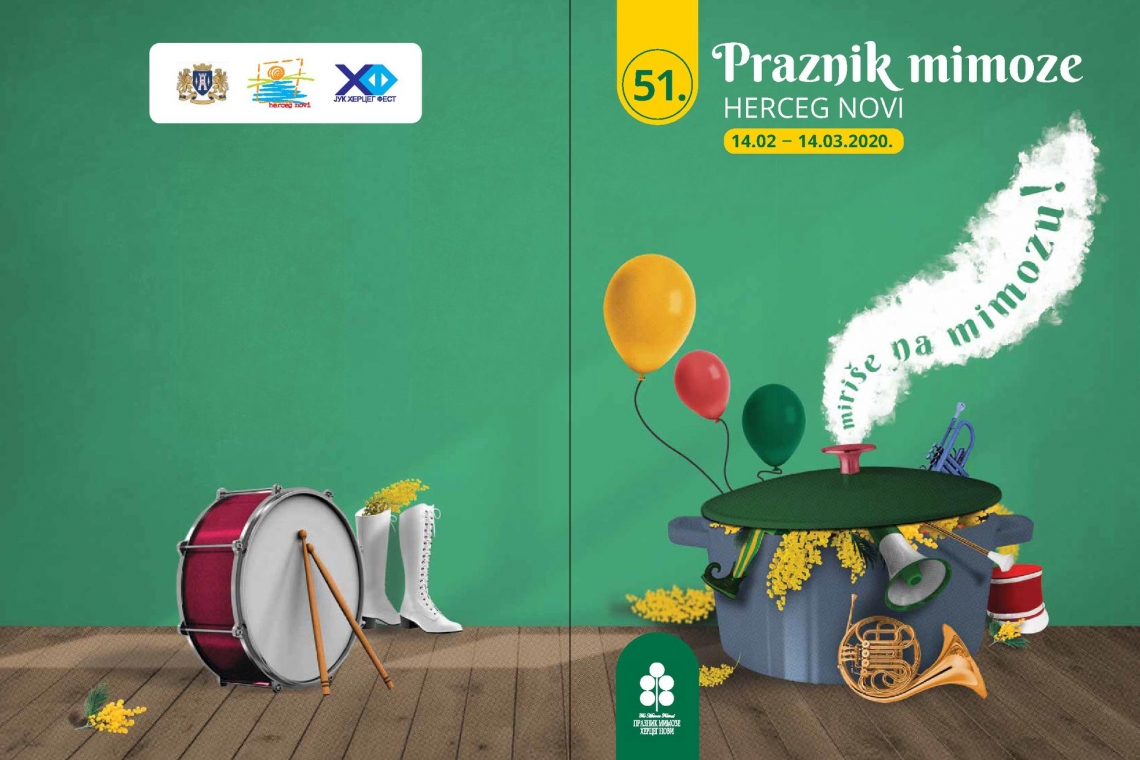 Born on the far and warm shores of Australia, transmitted by the gnarled hands of sailors who knew how to recognize the extraordinary beauty of a flower, she lived in a city surrounded by fortifications, surrounded by the sea, wiser and cooler than the one her yellow childhood eyes remembered. defiant and lavish at a time when nothing but blooms on the dark branches of trees and windows facing south. Herceg Novi lives on, for her and for her. For 50 years. " (Ksenija Matovic)

The city in which the mimosa is home-grown has designed in its honor the entire festival, and the first holiday in celebration of the sun-yellow flower, was held in 1969, under the auspices of the Municipality of Herzg Novi. Every next year, the Feast is refined, more elaborate and better organized. The essence has remained the same to this day. The mimosa feast should be a fusion of musical, theatrical, gastronomic, sporting events, carnivals, carnivals, festivities, folk festivals, all of which should be "spiced up" by the symbolism and smell of the magical mimosa and in the most beautiful way promote the city and its tourist offer.

After a decade of existence, the holiday lasted two months. After twenty years he reached Copenhagen, and after thirty, mimosa was a decoration on all the stands where Montenegro was represented at European and world tourism fairs. Mimosa has since created friendships and twinning among cities that continue today.

By years the oldest, by the atmosphere and energy carried by the Mimosa Festival, it acts as the youngest newspaper festival, so announcing this year's contents with city representatives, City music and majorettes, visited Belgrade, Szeged, Budapest, Nis, Skopje, Bitola. in April, Herceg Novi April theater festivities, in July Music Days and Book Fair, in August the Film Festival, Guitar art summer fest, then Jazz bay, and in September the only comic book festival in Montenegro - the Herceg Novi strip festival.

"For a city to acquire a soul, it is not enough to have a remarkable past, or to have a beautiful position, mild climate and diverse flora, but to nourish its past and present, constantly upgrade and sing." (Dragan Jeremic, esthetician and essayist).

The secret to the long existence of the Mimosa Feast is that it is designed and realized with love, original ideas, tenderness, unique energy, and strong will. It has become an unbreakable link connecting this city with all parts of the world. Through him, all discover and get to know the soul of Herceg Novi.

Much has changed in the way we celebrate over the years, but one thing remains the same - a selfless love for the Mimosa Feast, and respect for the people who founded, developed, enriched the Feast so that in the past half century it has become an authentic symbol of Herzegovina's winter tourism, but and carnival cultures in our area. Proof of this is the celebration of the Golden Jubilee, which showed that the story of the mimosa is endless.

February's 51 years are filled with joy and festivities in Herceg Novi. Mimosa changes the colors of the city to the colors of joyful play, dance, music, sunny skies, the blue Gulf Sea, the most beautiful Herzegovinian traditions, from hospitality to openness to new experiences and guests from all locations.

In addition to the Mimosa Festival, he also composed an ensemble of this festival, consisting of: City music, attractive cheerleaders and trombone players.

The city's flea orchestra has been in existence for 130 years. They have performed throughout the former Yugoslavia and in Europe. An integral part of the orchestra are cheerleaders, the decoration of the city and every defile. As a rule, these are graceful, slender girls who have a smile. They say, and in their performances, it feels like they are lovingly promoting Herceg Novi in ​​the most beautiful light. All of them notice, and it should be known that the Herzegovina majorettes are one of the majorettes of the ensemble that was first established in the Balkans. The Mimosa Feast premiered in the late XNUMXs. The Majorette ensemble was formed on the initiative of the then Boka Kotorska Tourist Association.

The loudest part of the ensemble is the trombone players. Those in the defiles, announcing the arrival of the carnival or the start of the defile with harmless and loud shots.

It is important to emphasize the ensemble "Bokelja", which has left an indelible mark in the history of both the Feast and its founding until 2001, as well as Herceg Novi itself. Also, there is the current klapa "Stari Kapetan", whose original name was "Mimoza".

Mimosa is also a family holiday. It is also interesting that it was during the holidays that love and marriage took place.

Masquerade is the favorite event for the people of Novalja. The art of mask making is well known here. Ideal creators of masks for over 50 years are, among other families, Peulic, who nurtures and transfers this tradition from generation to generation.

Masquerades are always an opportunity to show tremendous energy and joy.

In Sarajevo at the 1984 Winter Olympics, mimosa was the official flower of the event and was presented to the winners. The whole Herzegovinian holiday with as many as 160 performers was relocated to that city. Many media outlets have reported that Herceg Novi has made the best festivities. They organized a pre-Olympic masquerade in their city, and in the Olympic Sarajevo, cabaret Mimoza. The place has been waiting for days - so many mimosas have become popular.

Mimosa pays great attention to the organization of sports cups. The first swimming rally began in 1996 and the following year was presented to a Mediterranean audience at a competition in Bari. This resulted in the entry into the European calendar of swimming competitions. From the very beginning, our rally was a tourist-cultural cultural event because it promoted the city. It was through this manifestation that Herceg Novi paved the way for Europe. Today, it is a large organization that operates very successfully. Swimming rally gathers participants from the region, but also from Italy, Hungary, Russia, Bulgaria ...

The last few seasons have been organizing a jockey competition and archery. Competitors and coaches of the Jinja Club Panda have made the "Open Championship of Herceg Novi - Mimoza Cup", and the competitors of the Archery Club "Savina" are organizing the Mimosa Cup in archery. 2019 was the 10th Mimoza Archery Open Tournament organized at the Sports Center in Igalo.

Sporting activities The 50th "Mimosa Feast" is rounded off by triathletes and the 5th Novsk Staircase organized by the Herceg Novi Triathlon Club. The start for 157 participants and last year was in Squire. With over 646 scales, they reached their destination on Spanjola. The grueling but attractive bidding quickly became a spectacle. Sports lovers always think of the holiday.

During the first decade of the Mimosa Festival, the Mimosa Ski Cup was also organized. The organizer of the competition and the conceptual creator of the event tried to revive the attractive slopes of Orjen, offering content that would be of interest to both the hosts and guests. The first Mimosa Cup was held on February 12, 1978 on a makeshift trail at the mountain hut "Za Vratlom" in the Orjen massif, which is the highest mountain of the Dinaric system.

Due to the unusual beauty of the Orient, which is quickly reached and by car, you might want to consider a variant of the Mimosa Holiday in the snow. Even now, some programs have been devised, such as a cycling tour, climbing to the top of Subra on a full moon night, but the Orjen stone plateau, which is full of dense forest and endemic mulch in the central part, should be even more strongly promoted. Up to this point, guests can discover part of the magic by visiting Adventure Park on Vrbanj.

As challenging as the south side of the Orjen is, it is one of the most difficult routes to the top. Therefore, the marked path should be adhered to. It runs through the north, through a beech forest, where the terrain is far more gentle. There are trails from Vratla (2h) to Odiev and trails from Vrbanja (3:30). Because of the sun's shelter, snow lingers on it until early May.

The main profile of "Mimoza" is based on carnival, folk, carnival festivities, adapted to the tourist needs and the spirit of today's Herceg Novi. Most programs take place under clear, open skies.

It is also interesting to note that, as a rule, during all the past years the festival days were beautiful and sunny, with an average air temperature of up to 15 degrees, and that the slopes of Orjen at the same time covered the snow ...

The Mimosa feast speaks in its own way of the past of this region, of the civilizations that took place on this soil and their tracks, of Boka and its famous sailors, of people who are in love with the sea. Due to all this, Herceg Novi has become a large open-air museum in which there is always something going on and for which new contents are always sought. With all this, it is not surprising that the new list of destinations recommended for visitors with average wallet thickness is the Balkan Peninsula, that is, Herceg Novi as a starting point. Blogger Katherine Hove recommended a number of activities to try in this area, including paragliding. The starting point for the adventure is located on the edge of the Orjen Nature Park, closest to the city, on Žleba's property and fulfills all the conditions to become a significant segment of the active vacation offer in the region.

What brings the 51st Mimosa Feast?

For the first time in its history, this year's 51st Mimosa Feast will be moved from the first weekend of February to the middle of that month, namely February 14th. The organizers estimated that January was full of celebrations, from the New Year to St. Sava, so that it would take about fifteen days for the rest to be ready for all the surprises and interesting programs that await them. It was also estimated that weather conditions for traditional folk festivals could then be more favorable.

From February 14 to March 14, four programmatic thematic units and a rich music program were created in which the most famous entertainment stars from the region will participate. The Mimosa Feast will be opened by the concert of Lepa Brena, and the closing concert is scheduled for Zeljko Joksimovic. Every weekend on the plateau in front of the Hotel Igalo, popular performers will perform: Vlado Georgiev, Petar Graso, Aco Pejovic, Dejan Matic, and the Balkan diva Kaliopi meets the audience during the Mimosa, Fish and Wine Festival on the Riviera in Đenović.